CINCINNATI and SAN JOSE, Calif., April 21, 2017 /PRNewswire/ -- Today, several Macy's, Inc. locations will reveal their solar energy makeovers – part of a company-wide sustainability initiative – with SunPower (NASDAQ:SPWR) during dedication events at the Macy's Broadway Plaza store in Walnut Creek, Calif.; Bloomingdale's store at The Shops at Chestnut Hill in Chestnut Hill, Mass.; and the Macy's and Bloomingdale's fulfillment center in Joppa, Md. This marks the completion of 21 high-efficiency SunPower® solar energy systems installed this past year at Macy's and Bloomingdale's locations in seven states, totaling 15 megawatts and adding to the nearly 24 megawatts of SunPower solar that have been operating since 2007. Electricity generated by the new solar power systems will ultimately be sold to others. 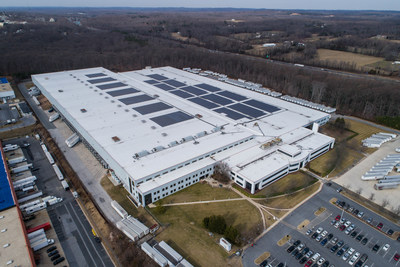 In 2016, Macy's ranked fourth among corporations nationwide for installed solar according to Solar Energy Industries Association (SEIA). About 70 percent of the 102 solar power systems in the Macy's and Bloomingdale's renewable energy portfolio feature SunPower's high-efficiency technology.

"As a leading national retailer with 140,000 dedicated associates, we have the opportunity to make a meaningful difference in improving the environment," said Chuck Abt, senior vice president of operations for Macy's, Inc. "Working with SunPower, we have been able to maximize the value of unused roof areas at our stores and fulfillment centers across the country by deploying the company's high efficiency solar technology that creates more energy in less space."

Nineteen of the 21 new systems feature the SunPower® Helix™ Roof product, the world's first fully-integrated rooftop solar solution for commercial customers. The Helix platform is a pre-engineered, modular solution that is built to last, maximizes power production, and can be installed nearly three times faster than competing technology, enabling customers to scale their solar programs quickly with minimal business disruption.

Macy's financed the majority of the SunPower solar systems on its stores through power purchase agreements, allowing it to buy power at competitive rates that act as a hedge against future utility rate increases with no upfront capital cost. Macy's does not own the renewable energy credits associated with most of the SunPower solar energy systems installed on its facilities.

To learn more about Macy's, Inc. sustainability efforts, visit macysgreenliving.com. And for more on how SunPower is leading the world with sustainable solar, read the company's latest sustainability report here.

About Macy's, Inc.
Macy's, Inc. is one of the nation's premier retailers. With fiscal 2016 sales of $25,778 billion and approximately 140,000 employees, the company operates more than 700 department stores under the nameplates Macy's and Bloomingdale's, and approximately 125 specialty stores that include Bloomingdale's The Outlet, Bluemercury and Macy's Backstage. Macy's, Inc. operates stores in 45 states, the District of Columbia, Guam and Puerto Rico, as well as macys.com, bloomingdales.com and bluemercury.com. Bloomingdale's stores in Dubai and Kuwait are operated by Al Tayer Group LLC under license agreements. Macy's, Inc. has corporate offices in Cincinnati, Ohio and New York, New York.

About SunPower
With more than 30 years of proven experience, SunPower is a global leader in solar innovation and sustainability. Our unique approach emphasizes the seamless integration of advanced SunPower technologies, delivering The Power of One® complete solar solutions and lasting customer value. SunPower provides outstanding service and impressive electricity cost savings for residential, commercial and power plant customers. At SunPower, we are passionately committed to changing the way our world is powered. And as we continue shaping the future of Smart Energy, we are guided by our legacy of innovation, optimism, perseverance and integrity. Headquartered in Silicon Valley, SunPower has dedicated, customer-focused employees in Africa, Asia, Australia, Europe, North America and South America. Since 2011, we've been majority-owned by Total, the fourth largest publicly-listed energy company in the world. For more information, visit www.sunpower.com.