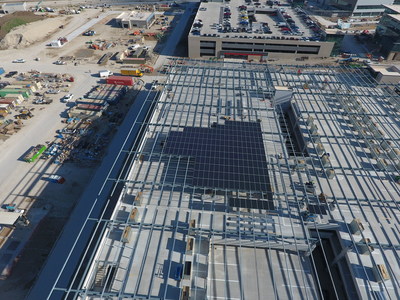 About 50 certified workers are now installing high-efficiency SunPower solar panels on steel carport structures across the top of four parking garages. When complete, more than 20,000 solar panels will cover the area equal to 10 football fields, offering shade and protection to vehicles underneath. The system is expected to generate enough clean energy to offset approximately 33 percent of the headquarters' energy needs, reducing Toyota's reliance on traditional electricity from the grid.

Toyota is integrating a range of energy efficient technologies and sustainable materials into the design of its state-of-the-art campus, with the intention of achieving LEED® Platinum certification by the U.S. Green Building Council (USGBC). SunPower's 20 percent efficient E-Series solar panels selected for this project are Cradle to Cradle Certified™ Silver, which may provide Toyota a significant advantage toward reaching that goal. SunPower is the only solar panel manufacturer in the world to achieve this certification, which demonstrates a product's quality based on rankings in five categories: material health, material reutilization, renewable energy use, water stewardship, and social fairness.

As a result of 14 years of partnership, SunPower solar power systems are currently operating at a number of Toyota facilities in the U.S.:

Toyota is financing the SunPower solar project installed at its Plano, Texas, location through a power purchase agreement (PPA) arranged by SunPower, which allows Toyota to buy power at competitive rates – acting as a hedge against future utility rate increases – with no upfront capital cost. Toyota will own the renewable energy credits associated with the system.

About SunPower
With more than 30 years of proven experience, SunPower is a global leader in solar innovation and sustainability. Our unique approach emphasizes the seamless integration of advanced SunPower technologies, delivering The Power of One® complete solar solutions and lasting customer value. SunPower provides outstanding service and impressive electricity cost savings for residential, commercial and power plant customers. At SunPower, we are passionately committed to changing the way our world is powered. And as we continue shaping the future of Smart Energy, we are guided by our legacy of innovation, optimism, perseverance and integrity. Headquartered in Silicon Valley, SunPower has dedicated, customer-focused employees in Africa, Asia, Australia, Europe, North America and South America. Since 2011, we've been majority-owned by Total, the fourth largest publicly-listed energy company in the world. For more information, visit www.sunpower.com.

Forward-Looking Statements
This press release contains "forward-looking statements" within the meaning of the Private Securities Litigation Reform Act of 1995, including, but not limited to, statements regarding timeline and projected energy output. These forward-looking statements are based on our current assumptions, expectations, and beliefs and involve substantial risks and uncertainties that may cause results, performance, or achievement to materially differ from those expressed or implied by these forward-looking statements. Factors that could cause or contribute to such differences include, but are not limited to: regulatory changes and the availability of economic incentives promoting use of solar energy, challenges inherent in constructing and maintaining certain of our large projects, and fluctuations or declines in the performance of our solar panels and other products and solutions. A detailed discussion of these factors and other risks that affect our business is included in filings we make with the Securities and Exchange Commission (SEC) from time to time, including our most recent report on Form 10-K, particularly under the heading "Risk Factors." Copies of these filings are available online from the SEC or on the SEC Filings section of our Investor Relations website at investors.sunpowercorp.com. All forward-looking statements in this press release are based on information currently available to us, and we assume no obligation to update these forward-looking statements in light of new information or future events.

©2017 SunPower Corporation.  All Rights Reserved.  SUNPOWER and the SUNPOWER logo are registered trademarks of SunPower Corporation in the U.S. and other countries as well. Cradle to Cradle Certified™ is a certification mark licensed by the Cradle to Cradle Products Innovation Institute.   LEED is a trademark owned by the U.S. Green Building Council. All other trademarks are properties of their respective owners.